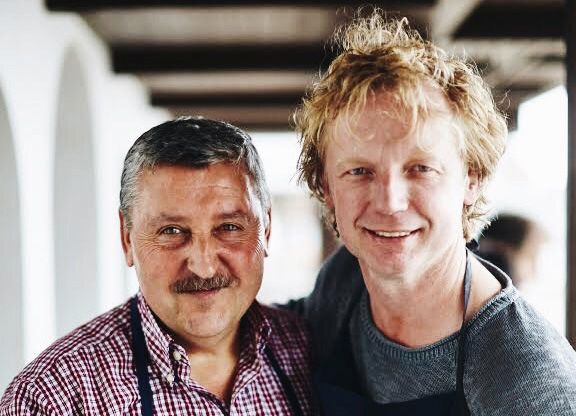 Fishermen pal around with him. Home cooks bookmark his Youtube channel for fish recipes. Meet Bart van Olphen, the hero of sustainable fishing. From clam-diving with fisherwomen in India to salmon fishing with his friend Maxine in Alaska, he has made it his mission to feature the faces behind where all our seafood comes from. Catch what Bart has to say about how you should explore his hometown of Amsterdam, where to go for bagel and smoked salmon, and what you should do when eating raw herring. 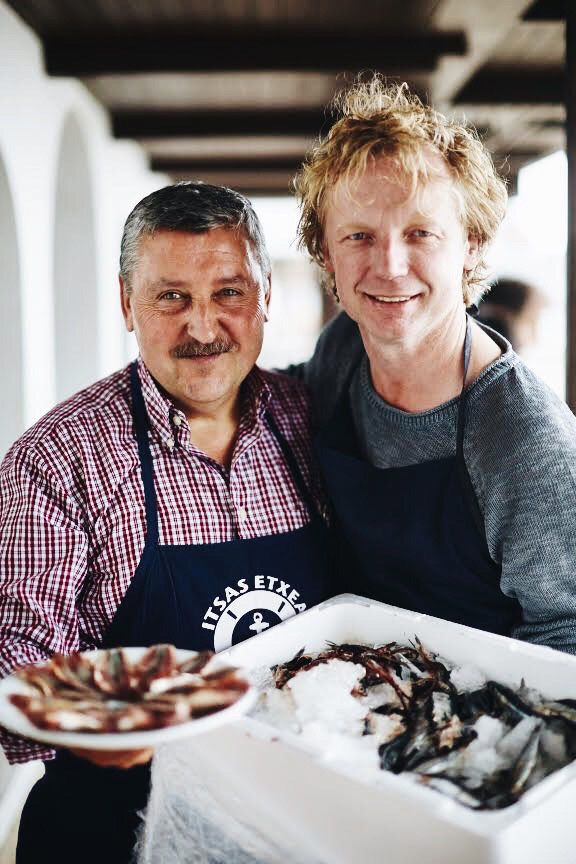 What do you feel defines Dutch cuisine?

For a long time, we were used to eating simple meals with lots of potatoes, in particular mashed potatoes with veggies and meat. Nowadays, the Dutch cuisine is much more multi-cultural thanks to all the different kinds of cultural food influences.

Bart van Olpen with a fisherman in The Netherlands from Bart’s Fish Tales. Photo: David Loftus

What are some local food you feel travellers can’t leave Amsterdam without trying?

Definitely kibbeling, those are deep fried fish nuggets. Then you have to try the lovely raw herring that you eat in one large bite. Okay, you don’t have to, but it’s the way you’re supposed to eat it.

For something sweet: poffertjes. Those are small pancakes topped with icing sugar and a lump of butter. As an alternative, croquette (kroket in Dutch) or little croquette balls (bitterballen in Dutch) with some mustard is also very nice. Last but not least, a dish you really have to try is green pea soup with smoked sausage or meatballs. I’m sure you’ll get addicted!

Where are your favourite restaurants in the city?

One of my favourites is Restaurant Bordewijk if you’re in for some pure and high class food. If you’re in for some fancy seafood, you can go to The Seafood Bar at Spui. On the other hand, you could eat at the lovely Le Petit Latin restaurant. The most famous Chinese restaurant is called Nam Kee, they even made a movie named after the restaurant; Oysters at Nam Kee’s. If you’re more into a nice brown café, Café Hoppe at Spui is the one. It’s very authentic with old-fashioned barrels behind the bar. The typical Dutch way is to order a fluitje (a flute). Another cosy but more modern café is Bar Spek.

What’s a typical Dutch breakfast for you?

We don’t have a particular breakfast culture, but if you want to have a nice breakfast, I would refer you to Bagels & Beans. There, I really like to eat my weekly toasted bagel with smoked salmon. Delicious!

If you eat a raw herring, you have to eat it in one piece! You grab the herring by its tail, throw your head back, let the herring slide in and enjoy the delicious taste of this lovely fish.

Another thing we are world famous for is Going Dutch. Most of you guys know this expression, which means every person pays for himself, and in some cases this is true. But nowadays even the Dutch are becoming a bit more sophisticated.

What is one Dutch food you can’t live without?

Pan fried sole with a classic butter sauce. Lovely, I would not know how to live without it!

What would you recommend travellers do in Amsterdam to experience the city as a local?

Rent a bike and enjoy the new upcoming spots, such as de Pijp, or take the ferry with your bike to Amsterdam North.

Where can we go to see your favourite view in Amsterdam?

The beautiful white sandy coast of the Wadden Sea. If you’re lucky, you’ll see a seal or catch some delicious cockles. During low tide, you can even take a fantastic walk on the seabed.

WHERE TO EAT IN AMSTERDAM

For: French food with a Dutch twist

For: One of Amsterdam’s oldest pubs

For: Fried bread and nutella

For: Bagel and smoked salmon

WHERE TO GO IN AMSTERDAM

For: Café hopping and shopping

For: Nature and seal watching